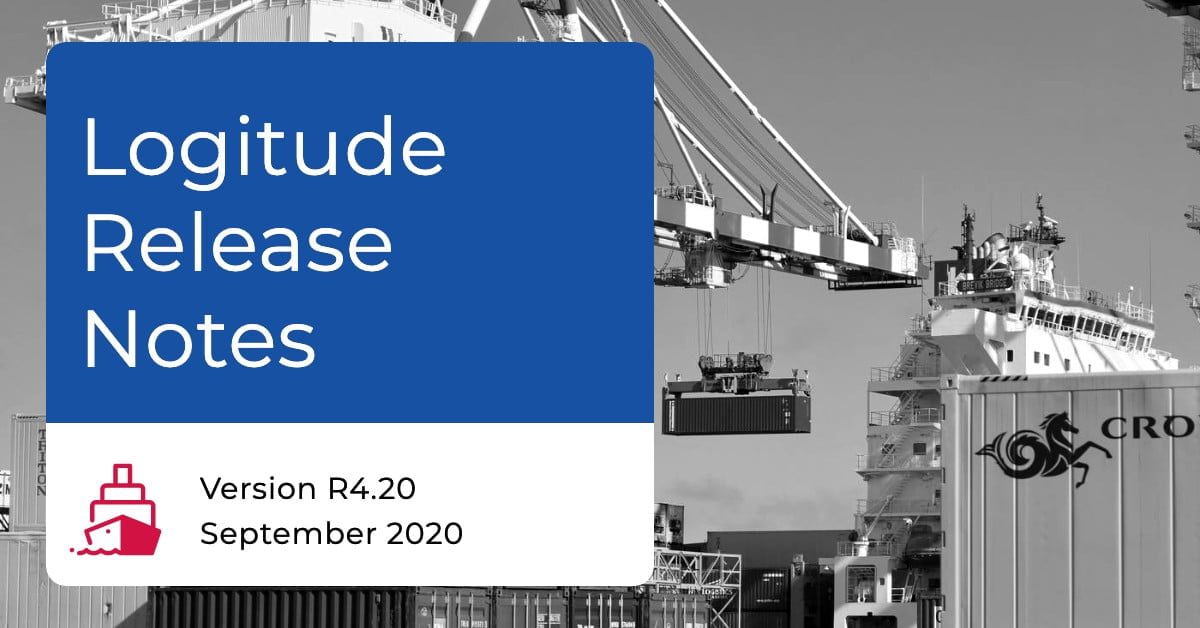 Logitude World provides the first true online freight forwarding software solution. It combines the power of cloud computing and modern technologies with a deep understanding of the Freight Forwarding Industry.

Since Logitude’s SaaS solution is rich in software modules, Release Notes are regularly issued to keep users up-to-date about new features and enhancements, as well as changes that were made since the previous release.

This version of the Release Notes introduces new features and functionalities, and describes existing features that were enhanced.

The Download Excel File (Advanced) option has been added to the BI reports (from the Download button), for downloading reports with totals. After choosing this option, select the Include Totals checkbox in the Export Advanced Settings window.

The BI Reports module now allows you to design reports based on the Shipment Charges fact, showing the payable and/or receivable amounts for a group of charge types that you define while selecting the report columns.

New Fields in the Shipments Fact

The OBL Type, Containers Numbers and Types Array fields are now available for adding to BI reports based on the Shipments or Shipment Charges fact.

When using the Data Warehousing (DWH) feature that allows admission to your private database, you will now be able to see the fields available under the Shipment Charges fact in the BI Reports module, in addition to the fields of the Shipments fact.

To have your own Data Warehouse DB, please contact us at support@logitudeworld.com.

The following adjustments have been made in the Quotes Dashboard charts:

The sorting function has been introduced to the list of charges in quotes so that users can easily detect missing details without having to go through the entire list several times, especially when the list is very long. The list of charges can be sorted by any of the columns including name, amounts, quantity, and prices.

More developments have been introduced to the Cross Docks module to improve the connection between the shipment warehouse leg and Cross Docks entries and releases.

In import shipments where it is possible to create a cross dock release from a delivery leg, the option has been limited to a single release. This means that only one active release can be connected to a delivery leg.

Over Manifest Event for Entry Packages

In the warehouse leg of both import and export shipments, updating the actual dates of the entry and release will update the shipment events and adjust the shipment status to Warehouse Entry/Warehouse Release.

The OBL types have been updated to include Seaway and BL Surrender.

Two new filters have been added to the Statement report:

Logitude now supplies automations which you can activate in your environment as needed.

Regional tax calculation can be applied to quote charges by simply choosing the relevant regional tax after activating the VAT calculation in the quote.

An error message will be issued when trying to void a receivable invoice/payment that is missing values in mandatory fields (like metodo pago and forma pago).

The Void mechanism for voiding accounting entities that have been transmitted to QBO has been adjusted to enable users to easily void AR/AP invoices and payments.

Dates and Numbers in Mail Messages

The values of date and number fields in mail templates will be formatted  based on the default definitions in Local Settings (Maintenance | System Settings | Local Settings). For example, if you define the date format as MM/dd/yyyy, all the dates in your messages will be sent in this way.

The Help Center is continually enriched with helpful training materials that provide answers to your inquiries and help you better understand the system’s features. The following has been added recently: